“Donuts. Is there anything they can’t do?”  – Matt Groening

One of the best ways to stay thin is to have thin parents.  I had thin parents and for the majority of my early life, I had almost free reign to eat anything that I wanted and not gain weight.  That began changing in my mid-20s.  Once the magical age of slowing metabolism hit me, donuts and other sweet treats moved from being a staple of my diet to being an occasional and special delicacy.  Despite occupying a lesser position in my world, they will always hold a special place in my heart–and belly.

When you ride bikes day after day, your body burns a lot of calories.  I try to keep it fueled up with healthy and productive calories, but I sometimes feel compelled to fall back into old habits.  The lure of the donut is a strong force to a calorie-consuming body.

On the final day of riding on BRAT1 we were getting close to our finish line in Texarkana.  For the previous seven days, we had leapfrogged over each other all the way from El Paso.  As with all of our BRAT rides, the team was split into two vehicles.  One of the vehicles took on the strategy of putting two cyclists on the road at one time and riding for 10-15 miles.  On most days, our car would put one cyclist out at a time to ride as fast as he could for 5-7.5 miles.  We were known as the sprinters and we seemed to only ride in the three hardest gears–again, we were newbies.

Because of the differences in riding strategies when we leapfrogged, it was not uncommon for our car to reach the transfer point before the other car could catch us.  We could often cover 10-15 miles faster than the other team because we rode shorter distances at a faster pace with fresher legs.  We had a rule that if a team reached the transfer mileage point before the trailing team caught you, you just kept riding and transfer when they caught you.  There were times that we would ride an extra 2-3 miles before the other vehicle caught up to take over for us.

On the last day of riding into Texarkana, we drove into Omaha, Texas in search of the transfer flag.  When one team would finish riding their section on bicycles, they would rack up the bikes, get in the vehicles, and drive past the cycling team to the designated mileage (again, usually 10-15 miles).  When they reached the requisite mileage, as noted on the trip odometer in their vehicle, they would look for a good place to stop and unload bicycles to begin their next section of cycling.  To let the team coming up from behind on bicycles know where to stop, we would place a “flag” for them to find.  The flag is usually a bright orange bandana that we noticeably tied to signs and road markers or weighted down with rocks on the side of the road.  The orange bandana is our signal to each other telling where one team started cycling and where the following team should stop cycling.

We could tell from our mileage on the car’s odometer that the other team had probably dropped the flag in Omaha.  So as our cyclists rolled into Omaha we all kept our eyes peeled for the orange bandana.  We found it tied around a sign on the south side of Main Street.  Train tracks ran east-west through Omaha and to the south side of Main Street.  The location chosen to place the flag and make our transfers was ideal.  There was plenty of space to get off of the road and out of the way of traffic.  It just so happened that it was also across the street from a donut shop…hmmm.

Stop at donut shop in Omaha, Texas for “personal reasons” on BRAT1

“Personal reasons” was the explanation given to the other group when we finally caught up to them.  On that leg, they ended up riding nearly three miles past what should have been the transfer point.  I couldn’t believe that they let us off the hook so easily with our explanation as to why we’d been late catching up to them and why they rode an extra 2-3 miles.  It wasn’t until that night, when we were sharing pictures on Facebook with friends and families, that they saw our picture in the donut shop inhaling a box of a dozen donuts and drinking chocolate milk.  We were busted!  We had a good laugh.  The excitement of finishing the ride had us all in good spirits.

On our first Mexico-to-Canada bike ride, we hit a day of horrendous winds riding from York, Nebraska to Yankton, South Dakota.  As the day began, one of our guys asked if we might be able stop stop in Stromsburg, Nebraska to meet with a cousin as we passed through.  When the topic came up the previous day, I (half) jokingly said that we could stop and meet with her if she brought donuts.  She did.  As we rolled into Stromsburg to meet her, she had three dozen donuts waiting for us in the back of her car.  It was a glorious stop.  Not only did it help pump us full of sugar and deliciousness, but also gave us a brief respite from the wind and a chance for a bathroom break.

Like stumbling upon Machu Picchu, the tomb of Tutankhamun, or one of the other wonders of the world, we came upon a tremendous discovery in Bismarck (spelled with a “c”–inside joke), North Dakota.  The day cycling into Bismarck was the 100-mile day for our cyclists.  As they rolled along, I spent the day in the support car following behind.  Throughout the day, I listened to the radio and heard the same local radio ads over and over again for most day.  “Brought to you by Bearscat Bakehouse” was something that kept coming up in a repeating commercial.  Huh.

Our hosts in the Bismarck, the Adairs, helped us get settled in to the First Presbyterian Church in Bismarck and then had us over to their house to clean up, eat supper, and visit.  We had a wonderful time together on a cool North Dakota June evening.  As we headed back to the church for the night, they told us that they’d bring breakfast to us at the church the next morning.  They had heard about my affection for donuts and offered to bring us some Bearscat Donuts.  Hmmm…I was intrigued.

The next morning, which was our penultimate day on bikes, we were introduced to a wonder of the world.  Opening the donut box, we met a dozen, large, banana-shaped chocolate glazed donuts.  At first, the sight of them took me by surprise.  After realizing what I was actually looking at, it was time to grab one and take a bite.  Marvelous!  We took 2-3 uneaten donuts with us in the car to consume through the day.  The box eventually made it back to my office.  Donuts.  Is there anything they can’t do? 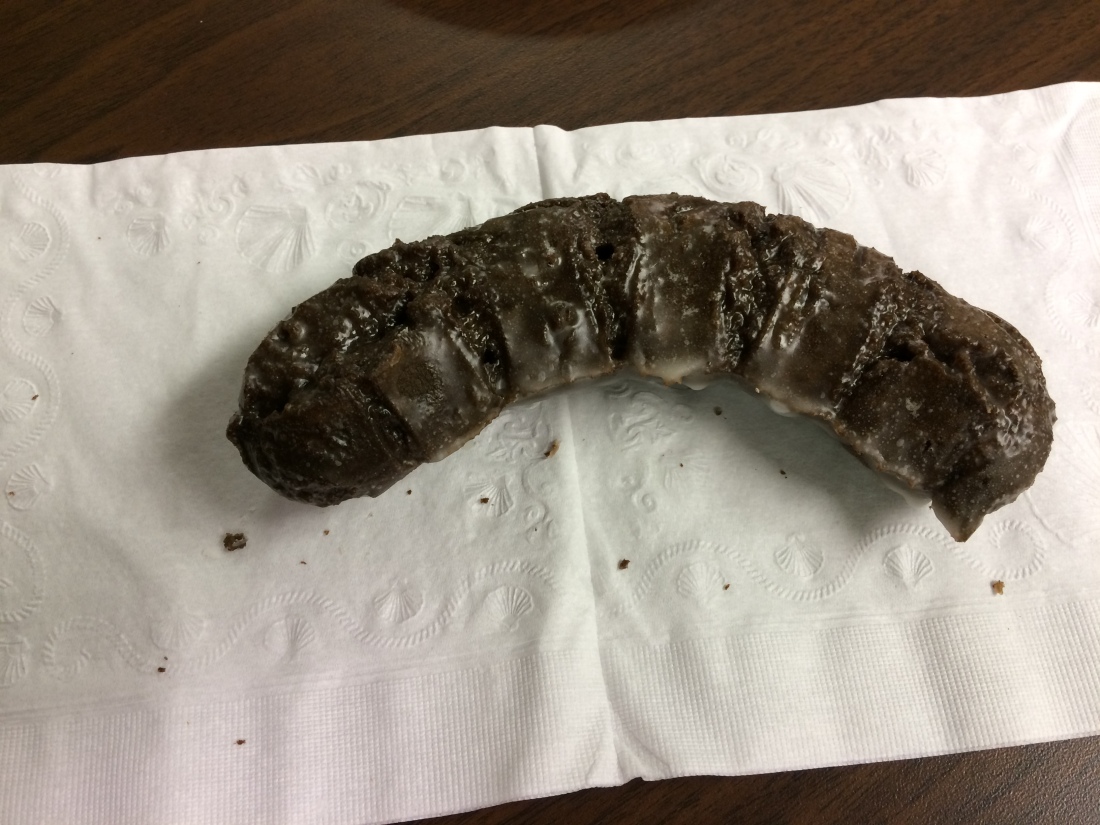 Professor of Management and Leadership and Director of Leadership Studies at Hardin-Simmons University in Abilene, Texas. Among the many things that we do through the program to study and practice leadership and teamwork are long-distance bicycle rides. View all posts by Coleman Patterson